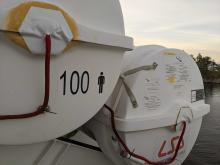 Damian said that to me once, in that disarming way he has of saying really provocative things extremely mildly so you can't even get mad.

Yes. I have been accurately described, which should be some sort of hex that a witch puts on you when you steal her wheelbarrow thinking her shack is abandoned. Not the part about sharks being all toothy and angry, although I maintain that sharks are deeply misunderstood creatures. (And also, sometimes, that happens.) No: I'm a shark because I have this compulsive need to keep moving forward at all times.

I remember one time in my mid-20s I did up a visualization of all the jobs I'd had since I was 13. I needed 4 columns to keep the overlaps straight. Then, when I got my first salaried position, I also took university courses--two at a time, and one horrible summer three--for years, until I got my degree. And then I went back and got a post-graduate certificate, because having a highly-skilled full-time job wasn't enough to quell the uneasiness inside me, that feeling of not being safe. Of this not being secure. Of impermanence. That if I stopped moving, I'd... what? I don't know. Something bad.

Last year, after... you know... the whole everything, I stopped. I hit it, that point where I couldn't keep moving. There was no forward to go to: I have an amazing life. I've been able to create lot of extremely funny (but in retrospect terrifying) stories about acting very irresponsibly and somehow not dying. I've seen dawn from the wrong side so many times with so many amazing friends. I have a loving partner. A house, and things inside it. I've figured out my childhood shit (more or less), and learned how to bury people I love and live with their memories inside me. I've thought deeply about family and, hell, I've even tried my hand at politics. And I've reached a point of professional accomplishment I'd never even imagined back when I pictured the future as a kid (ftr, that future was "underappreciated but quietly brilliant jazz musician who ODs at 29, so, well... missed that window.)

So. Maybe... moving forward needs a forward to move to? I've never lacked for goals. But...

Maybe I need to stop.

And learn how to just be. In a single state, doing one thing at a time. Maybe... have some fun? Or cultivate some hobbies that aren't "getting really good at something that I take way too seriously and spend too much time becoming a total nerd at."

Reader... I've tried. It's been an interesting exercise. And I've... failed. But I've learned some things about myself. Some of them I don't like very much, but that's okay. I still don't know where I'm going, but I've learned that I need to appreciate where I've been. And that's a good start.