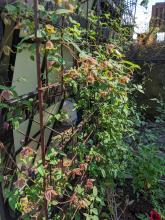 Hello! Two posts in one week: some sort of world record! This one's gonna be much less angsty and fraught, and much more newsy and flip. Probably. We'll see. No promises. I'm an 80-year-old crone in a 40-year-old crone's body. Wisdom may be dispensed.

The new job is going well. I'm getting the feel, finding my feet, and various other metaphors for plunging your body into ice-cold water after basking comfortably in a warming sun. A shocked gasp, an "oh god what have I done??" and then a new, bracing awake. And now, I have to swim. But I love swimming.

Did I ever tell you I was a competition-level synchronized swimmer? I started as a racer, but I have a very squat and strong body -- I'm not made for lithe things, I'm made for brute power and intense sprints. I had nose clips and stringy hair (no matter what the conditioners promise, nothing can really fix chlorine damage) and incredible muscles, and I could heave my bottom-half clear out of the water with only my arms.

I stopped doing synchro when I was 15 -- there weren't many options for competition that weren't too expensive for my parents, and the Summer Games raised the age-limit so I couldn't enter when I was ready. So I quit. But I still remember that physicality, the feeling of breathless exhilaration when you push your body and feel it respond, and succeed.

I feel like that. Breathless, but strong. I can do this.

Also feeling reflective. Thanksgiving is coming up, an oddly contrived and strangely subdued observance that's vaguely religious but not specifically, a colonial festival but only indirectly -- in other words, a watered-down version of the US holiday, without the worst celebrations of colonial fuckery, but still a commemoration of some of it; so, quintessentially Canadian.

I've been feeling very thankful lately, but only indirectly, and not specifically, but this week I had a mirror held up to my life in the form of visitor I haven't seen in decades. The first guy I lived with for an intense and frustrating six months when I was 18 stopped by, and it was interesting, and sad, and fascinating to get a glimpse of my life back then. It was a road that led directly to where I am today, yet a landscape I barely recognize -- who I was and could have been, recalling choices I made that weren't the best, or the smartest, or the kindest, but also the right choices. And also some decisions that were absolutely wrong, and reactive, and stupid, but somehow worked out anyway.

In short: I'm very, very lucky. Despite the last few years, even. It's nothing compared to where I could have been had I not figured shit out, and I've learned some things: no matter what, just keep swimming. There will be stormy seasons again, but the weather seems to be holding steady. For now.

What's next? The usual life stuff, hopefully a decent stretch without death or addiction or sadness or burnout. I'm going to the mainland to hang out with the people I love for friendsgiving. We're hosting my sister Sam and her husband later in the fall, and I really hope the weather holds for them; but either way, I'll give thanks for the achingly beautiful closing notes of an incredible summer. I have some amazing people to share my life with -- new family, old friends, and some new ones too. How many people get to add delightful new humans to their world in their 40s? This gal. What a life.