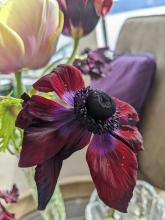 So the US's headlong flight into Christian evangelical fundamentalism continues apace, and I'm not sure what I can say about it that everyone hasn't already said. I have no unique insights, no special rage--just... the usual kind.

Unfortunately the arc of history... isn't. There is no teleology to it; society doesn't move "towards" "better" anything. There's just fights for and against competing ideas and interests. And these are never won--just stalemated. Rivers of ideology are not rerouted, only dammed. Any system, just or unjust, can be undermined with enough erosion, enough neglect, and enough pressure.

The biggest vulnerability in democracy is that people who disagree about the inherent humanity of others always have the upper hand. They have no boundaries or standards about carrying out politics in a way that respects the fundamental dignity of the people they disagree with--because they don't believe humanity is a thing that exists inherently. Their own, sure. But yours and mine? Not really.

Not that long ago I'd have argued that it's more complicated than that. But I'm tired of the illusion of evenhanded grace, and I don't believe any caveats about how there are good people on both sides--bullshit. There aren't sides in any sort of equivalency. You can't support policies that lead to oppression, poverty, inequality and injustice and get any sort of pass just because some other policy matters more to you than that. If it does, you're not being a good person.

I had something else to say, I'm sure of it, but I think I've said enough for tonight.